The Southeast Ain’t My Home Anymore

As the plane pulled into the gate in Atlanta, tears began to run down my face. I was overwhelmed with emotion knowing I would be climbing at my former local crags with friends I hadn’t seen in months (and even years!). I reminisced about topping out Latin for Daggers, The Big Much, and The Standard among others. The tears evolved into laughter. My hands began to sweat. I was back home. Or was I?

I spent my first day climbing at LRC. I used to scoff when others asked me to venture to every southern climber’s first bouldering crag. However, I found the quality of rock and variety of movement to be tremendous (even shelling out $8.75 to be there). I hopped on some classics I never gave a chance including Ruby Roo, Mystery Machine, and Mystery Groove, and then I made my way on to engage my try hard face on The Wave, Crack of Doom, and A Face in the Crowd. Although I came away with no major sends, I surprised myself with progression. I used to fear climbing in front of others, but I tried to have an “I don’t give a shit” mentality and climbed better than I ever had climbed outside before. As we made our way toward the back of the boulder field, everything felt familiar, but I still had a hard time remembering names of boulders and the location of them. Maybe I really wasn’t back home. 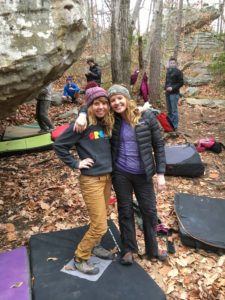 We drove to Rocktown on Saturday expecting a huge crowd, and the squad rolled up to the Orb and warm-up boulders around 10am. Seeing so many faces and sharing psych and laughter truly made the weekend so meaningful, and although southern sandstone is unmatched compared to anything else I’ve climbed on, it was the company that made the weekend one to remember.

After I devoted an immense amount of energy trying Deception, I went over to an old project to try and snag the send. Slamming into the pads one too many times left me feeling a little hopeless, but after a long break, I came back and snagged the send. Another v5 in the books. I finally started to feel like the training paid off. The pitter-patter on the fallen leaves hinted that it was time to find my friends to head back to Chattanooga, but on my way back to find them I felt… lost. I used to not require a guidebook to get around this crag, but I had to ask for directions. My happiness from the day turned into a deep, solemn feeling hitting me in the heart. I really wasn’t home anymore.

As I boarded the plane back to Chicago, I scrolled through old and new pictures of climbing in the south. The tears came back, but I began to feel hopeful. I may not feel as comfortable with southern climbing as I used to, but I felt inspired knowing I have the opportunity and ability to adopt a new home crag. I recognized that having a static mentality and an inability to adapt to a new community would only hold me back. The south isn’t home anymore, and I am (slowly) beginning to accept that.