*Disclaimer: I know there are some real health reasons you may have to cut out certain foods, but by no means is that any sort of diet. Just like it’s important to listen to your intuition, it’s important to listen to your trusted doctor, too. I am not a trained professional and don’t have any background in nutrition. I can only speak from my experience of dealing with an eating disorder for eight years. Everyone is different.

Raise your hand if you’ve ever gone on a diet? So that makes all of us. I can admit to giving into the diet industry’s malicious and false advertising. Paleo, keto, gluten-free, sugar-free, raw, and not to mention hell: the all-encompassing subgroup of restrictive diets, I’ve navigated my way in and out of what seems like a never-ending cycle of neglecting to listen to my body. I accept that it’s hard to immediately let go of a mentality that’s been ingrained in me for the majority of my life, but I’m just now recognizing how robust my life (and yours) has been after I started eating intuitively and not solely based off of good food/bad food list again.

So why did I stop dieting?

When whatever fear made you want to diet in the first place starts to control you, it’s difficult to stop putting labels on everything that goes into your mouth. Food starts to become less of a necessity and more of an obsession, and you begin to feel like restricting is the only way you know how to eat anymore. Your stomach grumbles, fatigue sets in, and your mind is slowly losing its willpower. It only takes a matter of time until your body has had enough. What once was just a cookie turns into the whole sleeve of cookies, a container of trail mix, and a bag of chips, but then guilt depresses the high you felt while binging and you find yourself back to restricting again.

This same premise also goes for those who are selectively restrictive. When I first started reintroducing foods back into my diet after going low-carb, I not only craved carbohydrates, but I felt like my life depended on anything and everything sweet.

I vividly remember my most recent binge/restrict episodes (a couple years ago). I went to a restaurant and ordered dessert with my family. I reached for the warm, chocolatey cookie and devoured it, but my body wasn’t ready to be done with the cookies. “Two cookies? That’s no big deal. Everyone else at the table was eating two cookies, anyway.” But then two became three, and three became seven, and seven became ten. It felt so right in the moment, but that night I found myself sobbing and pledging to go back to the low-carb diet. Ironically, it’s the low-carb diet that led me towards the binge episode, to begin with.

Give yourself permission to eat all foods. When you stop restricting, no one food (or food group) will have control over you.

“Hey Sav, I think we’re going out for ice cream tonight if you’re interested!” “No thanks, I’ll pass. Too much homework. Thanks for asking.”

After asking me too many times to go out or come over, my friends (now acquaintances) stopped asking. In fact, I think they were so tired of putting up with my bullshit that they ultimately just stopped talking to me. I was so fixated on what I was going to eat and when that I missed out on the opportunity to laugh and have an engaging conversation with friends. What did skipping out on pizza and eating boiled chicken with brussels sprouts bring me? Well, first and foremost it brought me bad gas. But more importantly what it didn’t bring me was pleasure. Food is meant to be enjoyed with company. Historically speaking, it has been meant to be enjoyed with company for thousands of years.

Think about what you’re missing out on when you bail on your friends or family. Is bailing genuinely worth it? The answer is usually no.

I have a challenge for you. Go ahead and delete your MyFitnessPal app and let me know how much time you have in your day to focus on other things besides food. Also, take a look at how you change your definition of self-worth. I used to get caught up in “if it fits your macros” to the point that I would self-loathe in my own negativity if I was off for the day. I would stress out about making sure I eat throughout the day only so I could eat a cupcake at night since it fit my macros. 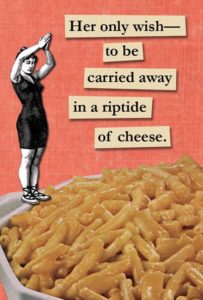 I based my feelings on whether or not I kept my caloric intake under a certain amount just because an app told me what my metabolic rate was. Does that app know who I am? No. And no diet knows who I am either.

When it came to going out to eat, I used to only go to restaurants that had their calorie information listed on the menu. If the calorie information wasn’t listed, I would consult to my dieting app to ensure that there was something I could eat. If my dieting app didn’t list any menu items, I would frantically Google search until I could come up with something. I missed out on conversation and time with those I don’t get to see as often anymore. I was ignoring my family and friends because I was obsessed with something so negligible. I forgot that food tastes good when you order what you desire, not what society tells you is ‘good’ for you.

Counting is not worth it. Listen to your body and trust your intuition. If you crave something, go for it, and don’t worry about if it fits your macros or under the calorie quota you’ve given yourself. Let it go and find purposeful things to devote your time and energy to instead.

The next time someone tells me about their hot, new fad diet they’ve put themselves on (especially climbers who go on diets for the sake of sending), I will remind myself that dieting left me in more pain than anything else I’ve ever done. The diet, anger, and depression consumed me even when I reached whatever goal weight I aimed for. Food is pleasurable if you let it be.