I never thought that saying no would leave me with so much guilt. I embarked on a pilgrimage to the valley in hopes of climbing my first big wall. My boyfriend, James, wanted to fulfill my hopes by also accomplishing one of his goals, climbing the Nose on El Capitan. The original plan was to ascend the Regular Northwest Face of Half Dome, but he knew what he wanted, and I commend him for his passion of pursuing his dreams. I spent countless hours before the trip preparing for what to expect on a big wall: hauling, jumaring, and aiding. In fact, most of my time spent in the gym the month leading up to the trip was learning how not to feel like a baby deer in my aiders. After barn-dooring out of them on multiple occasions and assessing why I was going on this trip in the first place, the notification to check-in from Southwest appeared on my iPhone. Both trepidation and excitement ran through my body, but it was finally time to head to California.

We spent the first two days in Tuolumne Meadows on some easy multi-pitch climbs. On West Country, a four-pitch 5.7 on the Stately Pleasure Dome, I led the second and fourth pitches while James led the first and third. The second pitch was a sustained lieback for almost 100 feet, so the sport climber in me was ALL over wanting to lead this pitch. This pitch was my first lead on Yosemite’s polished granite, but I was surprised with how well the rubber on my shoes stuck. I constantly feared my feet slipping, but I felt more comfortable as time went on… just like everyone does.

When I began to lead the fourth pitch, I noticed James didn’t look or act like himself. I wasn’t sure if he was upset or tired from traveling, but I decided to keep on moving so I could get him off the dome. After belaying him to the summit, he mentioned he had a throbbing headache; furthermore, he looked pale and felt nauseous. Shit. After scrambling down the side of the dome on the third and fourth class descent, the altitude finally worked its magic. The vomiting didn’t cease for another six hours, and I felt helpless listening to him wince and vomit for that long. Luckily he felt much better the following day, and his appetite proved that he was back to his last-name-hungry-first-name-always self. We decided to take it easy the next day as James needed to regain everything he lost the day before (literally!), so I led every pitch of Northwest Books on Lembert Dome. The climbing was exposed yet chill, and the psych to be in the Valley continued to grow stronger. 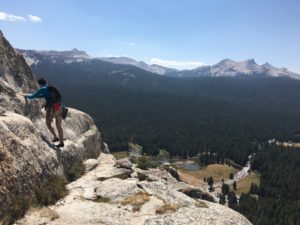 We wanted the first day in the Valley to be for practice aid climbing, so we went up to Lower Yosemite Falls. I felt the intense emotions and indecisiveness finally make their way to the surface, and tears began to roll down my face. I had been holding in my anxiety for so long regarding climbing a big wall, and the gauntlet finally exploded. I wasn’t just on the verge of a meltdown; I was having one. I had to let James know that I wasn’t ready. I had to say no. I was just so scared of disappointing him and crushing his summer goal of climbing the Nose.

We planned on heading to a crag to both plug gear and practice aiding the day after my meltdown, and although we both sent some single-pitch trad climbs, only one of us practiced aiding. It wasn’t me. I finally said no. I finally let loose. I wasn’t prepared, and I was worried to put both of us in potential danger. We got into an argument, and I cried more than I probably should have. That’s what happens when you hold intense feelings in for too long. I never seem to learn my lesson. We both climbed a 5.10a on gear that day, so I at least had something to keep my spirits up… sort of (this was my first 5.10 on gear). 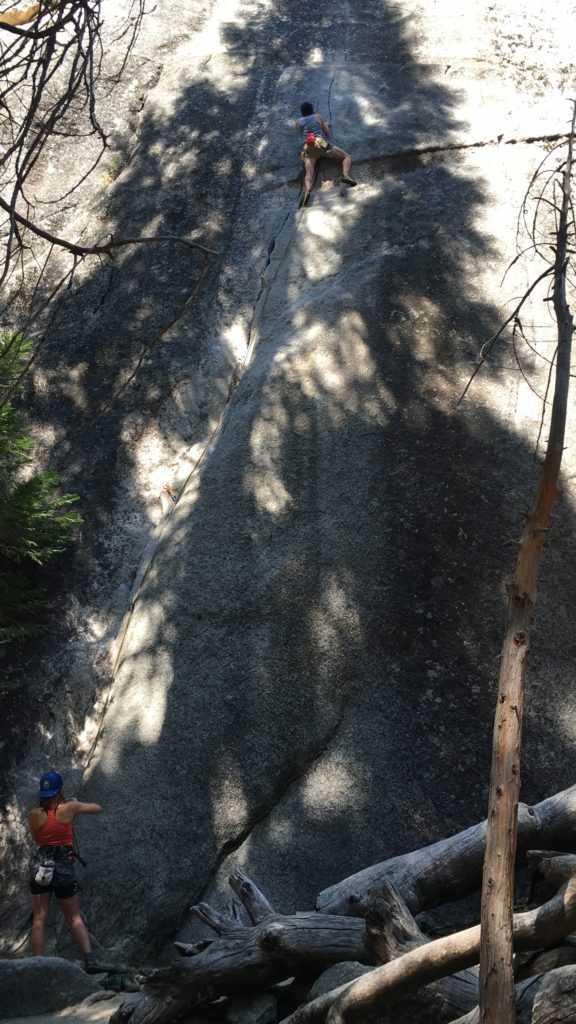 James on the send of Church Bowl Tree, Yosemite Valley.

The common theme of the next few days was trying to cope with immense amounts of guilt. This one decision left me feeling both outraged with myself and sad for James. We both saved up money and purchased a substantive amount of gear to do this, but I decided to bail last minute. Could the timing have been better? Possibly. I just knew he longed for it, and thus I decided to wait it out. James wasn’t too psyched on climbing much after I made the decision, and I completely understood why he felt this way. I’ve never cried so much over climbing in my life, but I commend myself for being honest and courageous. I had to muster the strength deep within me to make the decision knowing it would disappoint, but lesson learned: we can’t please everyone.

Almost a week after we flew back to Chicago, I am not left with any more guilt. Instead of drowning in my own self-pity, I decided to use the energy to reflect on what I learned over the course of the trip:

I can’t wait to return to Yosemite with an open mind and more trad climbing experience. I can’t believe I only started climbing on gear a few months ago.

thank you for posting this! Climbing is an incredible sport in the way it challenges us more mentally than physically in many instances. I think about climbing all day every day. I look at photos, I read personal accounts like yours. For many climbers, the passion goes hand in hand with obsession. I was exposed to climbing a few years ago, when I was taken outside every. single. weekend. I sent a 10 within the first three months of climbing (like, at all!). With and without consistency, and the realization of the actual risk, my lead head has gone to and from no-man’s land! Just last weekend I cried myself off of a 5.7. It’s difficult to say no, especially when you are climbing with a partner who is also your romantic interest/best friend/everything in between. They want us to succeed, but sometimes what should be a positive desire becomes pressure for me. It’s a reality that somethings just not gonna go if it’s not the right time. Selfishly, I’m so happy to read that experienced climbers I look up to (you) are able to admit their fears and own up to their openness to accept that they could have done better, but they just weren’t ready.. Thank you for sharing, lady! 🙂